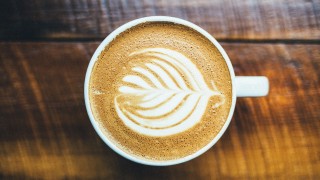 I first visited this delightful little hobbit hole whilst on an eccentric hunt for novels by the early 20th Century writer Thomas Wolfe.

Now, I didn’t find any Thomas Wolfe books (which I can’t really get mad about because neither Waterstones nor WH Smith stock any of his work either) but I did find a cosy secluded bookish room.

A room scattered with bookcases, and couches, two of my favourite things. I tried the loose leaf Darjeeling tea which came in a wonderful glass teapot with a built in tea strainer which the checkout girl kindly demonstrated for me, so I could strain my own tea after a few minutes of brewing had passed. 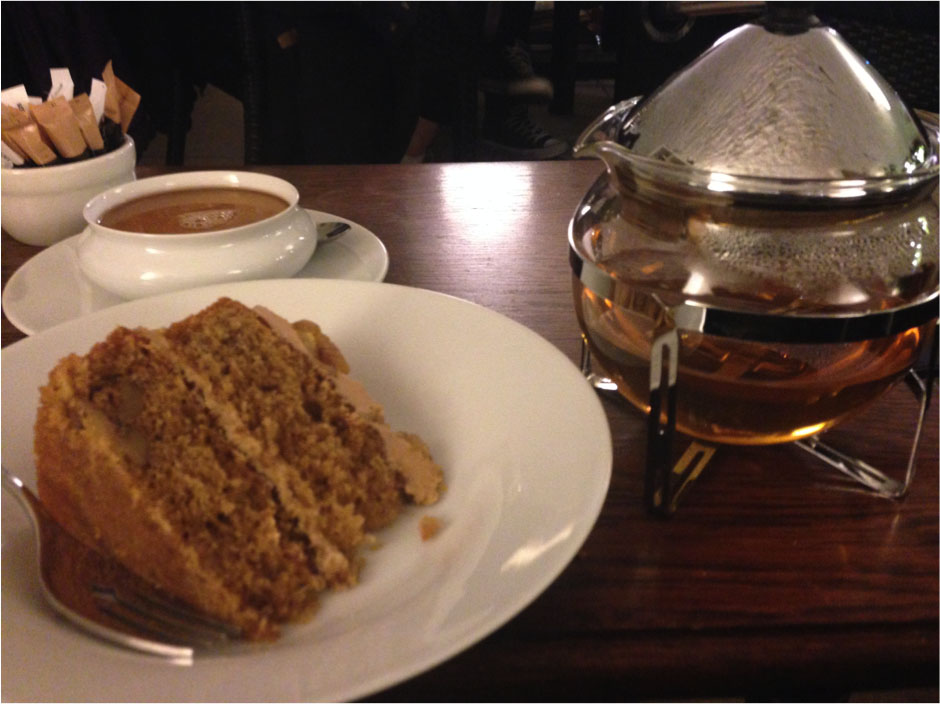 The mug was also a shallow breakfast mug, my preferred type of mug like George Orwell says; “The breakfast cup holds more, and with the other kind one’s tea is always half cold—before one has well started on it.”

Alongside the wonderful glass teapot and breakfast mug came a slice of homemade coffee and walnut cake which I don’t even want to have to describe because thinking of it gets my stomach rumbling and my mouth salivating.

It surrendered itself in to clumps of crumbs at the touch of the fork, crumbs which I coveted and captured until the plate was clean (much to my friends’ amusement).

A word of warning on the low ceiling/step combo as you exit, something I failed to notice and bumped my head and then to add insult to injury noticed a “Mind your head” sign, placed… Now I cannot be sure as I was dizzy, but in a place you’d only notice it after bumping your head. 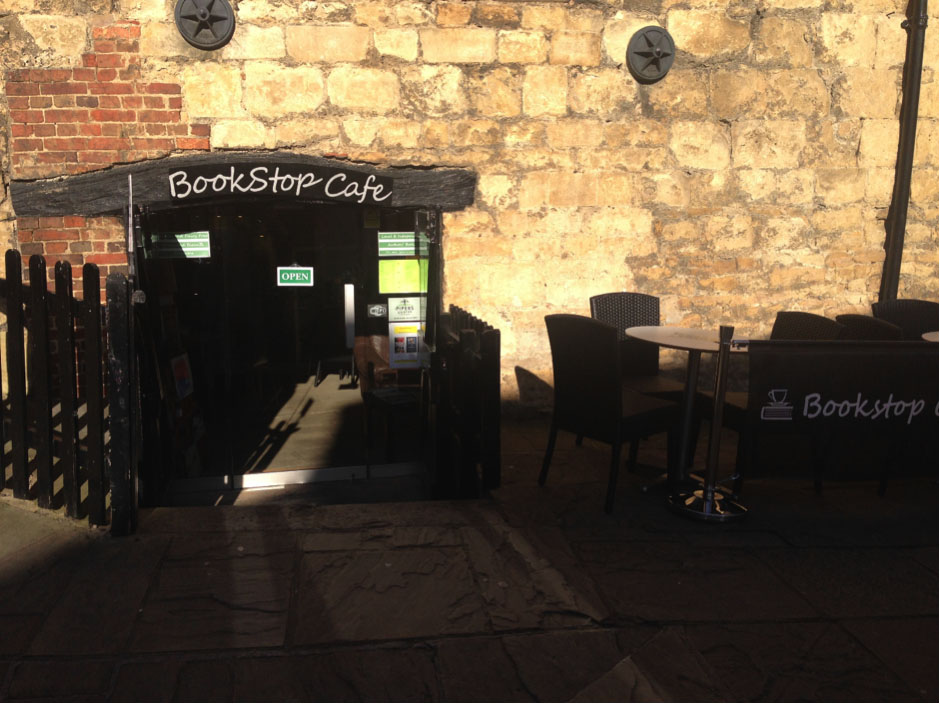 Coffee Aroma Is a strange one, imagine your Grandma’s house but with a secret Breaking Bad style laboratory on the ground floor (for the use of making coffee, not Crystal Meth just to clear the air). It’s a brilliant blend of your Grandma’s furniture and quirky novelties.

Floral printed armchairs and frilly lamps contrasted with a World map cleverly displaying the coffee’s origins with postcards (pictured below).

A castle style ceiling mural is well balanced by black and white art prints (which are actually for sale).

Personality wise it comes across as a café that doesn’t take itself too seriously nor is it toying around, like the one friend you have that finishes laughing too early, and has a well-practiced grin as a coping strategy for everyday life. 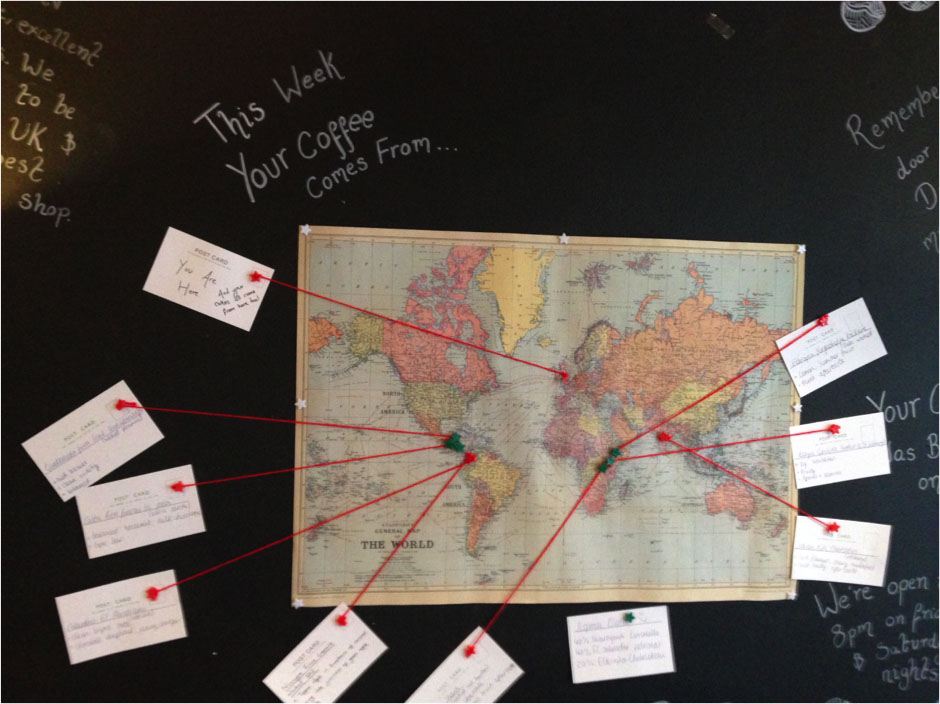 But on to the laboratory, downstairs there is decanter’esque style instrument funnelling coffee through filter paper.

A slow process but one that can be observed curiously like some sort of coffee sand timer, it definitely increases ones thirst and creates a greater appreciation for the soon to be gulped drink.

The serving style is hardly old fashioned, the drinks are served out of glasses rather than mugs and placed on a rustic wooden board alongside a touching glass of water, which I found rather thoughtful and a treat to take down after the Chai Latte I consumed. 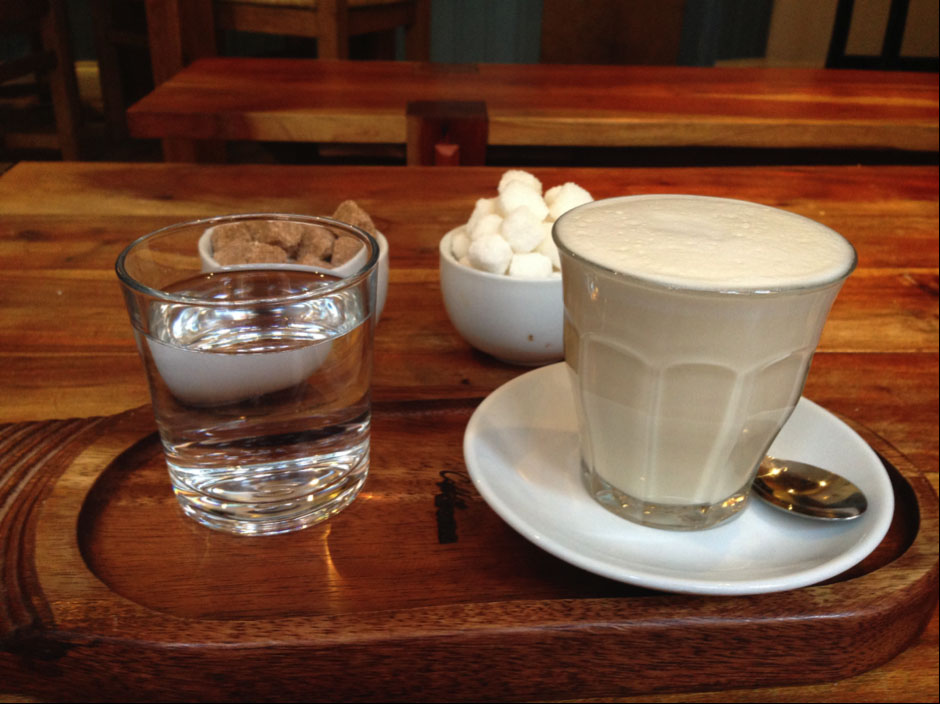 The staff are true to their sketched caricatures on the upstairs blackboard and just as sweet, offering polite sincere service… They actually seemed happy to be at work and relishing their Dexter’s laboratory style of coffee creation.

Coffee Aroma has a style and personality that rebels against the coffee chains, a stubbornness and refusal to conform that is best summed up in their promise that “decaf, soya and skimmed milk will be available when hell freezes over”.

It’s a café that blends the unblendable, the warmth and comfort of your grandma’s house combined with coffee creation on an almost scientific level, the perfect blend of old and new. 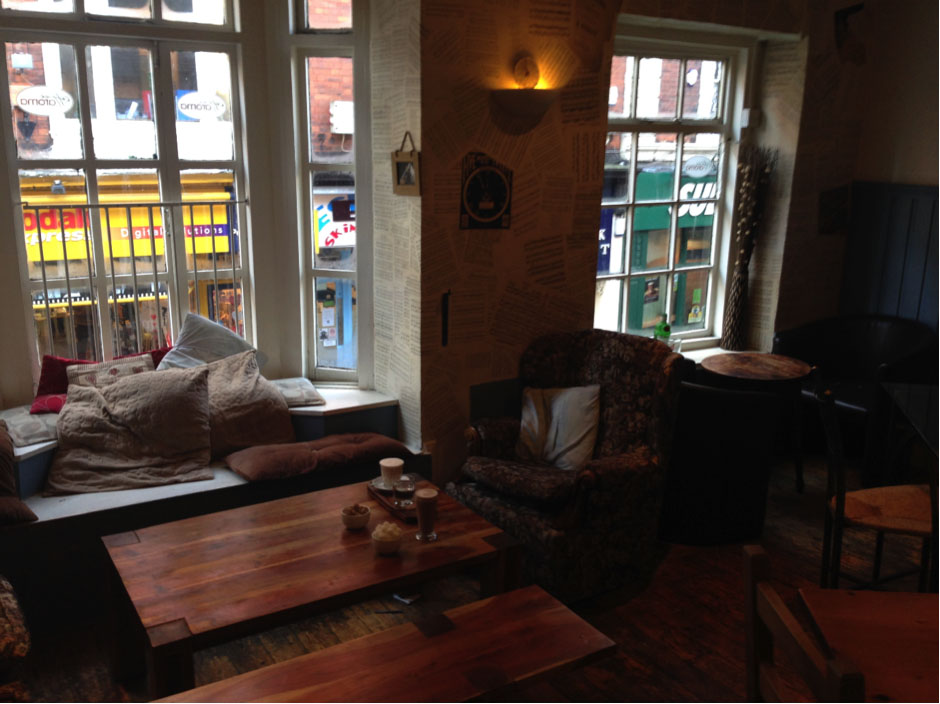 After leaving Coffee Aroma the Danish word ‘hygge’ (which roughly translates to cosiness) jumps to mind.

A word better described than defined, in practise ‘hygge’ means creating a comfortable atmosphere and enjoying the good of life with good people around you. Sitting in Coffee Aroma playing chess (or scrabble or tumblin’ towers, all provided by Coffee Aroma) with your good friends is ‘hygge’.

Cuddling up on the plentiful amounts of pillows (I saw 10 in one room upstairs) drinking hot chocolate that is ‘hygge’. Coffee Aroma provides the environment and the coffee (Or tea… I’m a Chai Latte man myself) to create many ‘hygge’ moments.

Best for Coffee and hygge 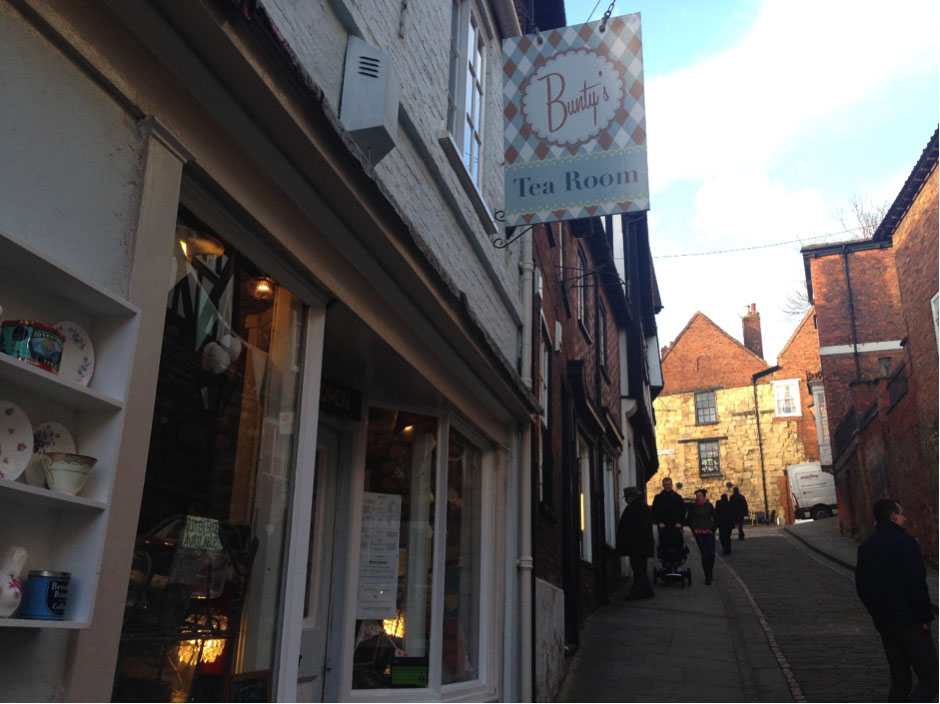 Upon entering this steep hill tea room you’re struck by the Britishness, which may not even be a word as Microsoft Word corrected it to ‘Brutishness’ which I definitely do not mean.

It really is a moving picture of 1930’s England, more a clingy hug than an acknowledging nod to the nostalgic times past. The interior right wall is stone, and not a mock interior design effect but real grainy stone. The glass topped table houses numerous British postcards beneath it, some address side up covered in scrawly ink, some showing scenes of English landmarks.

The favourite of my group of friends was a map of England style postcard displaying landmarks from particular towns. Never has a table been so interesting and gave one such a remembrance of ones heritage. Like a Christmas tree in tinsel the place is wrapped in polka dot and floral bunting. Bunty comics from the 1960’s are housed behind the glass of the till front.

It was more a British museum than a café and one could spend a whole day reading the different scattered English homages… if it wasn’t considered rude to lean over a neighbours table of course. 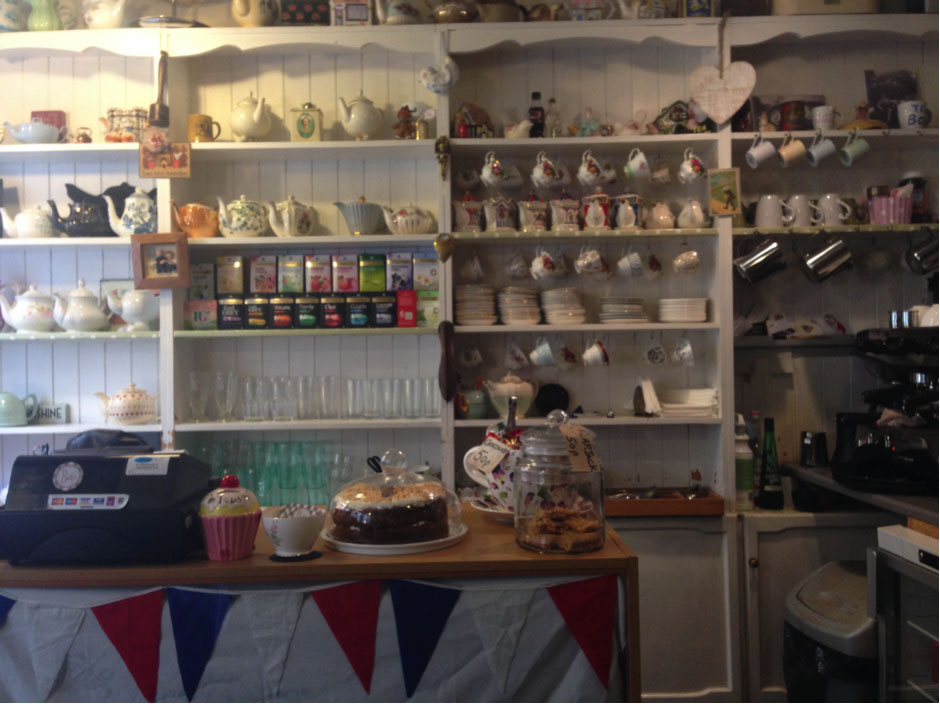 Most flattering of all was the service, upon stepping in before I even had the time to compose myself and sweep my fringe out my eyes we were smiled at and seated and told we’d be served to, and this high quality I guess one could say traditional level of service continued throughout.

Now with the delivery of our tea and cake the place really transformed, it threw away the traditional British pork pie hat and donned the hat of Alice in Wonderland’s Mad Hatter. The eclectic tea mugs, saucers and teapots led us all to agree that we felt like guests at a Mad Hatter tea party.

It brought a fantasy to the whole experience that won’t soon be forgotten. The teapot which my friend and I shared housed around 8 cups of tea, and the carrot cake was delightful. 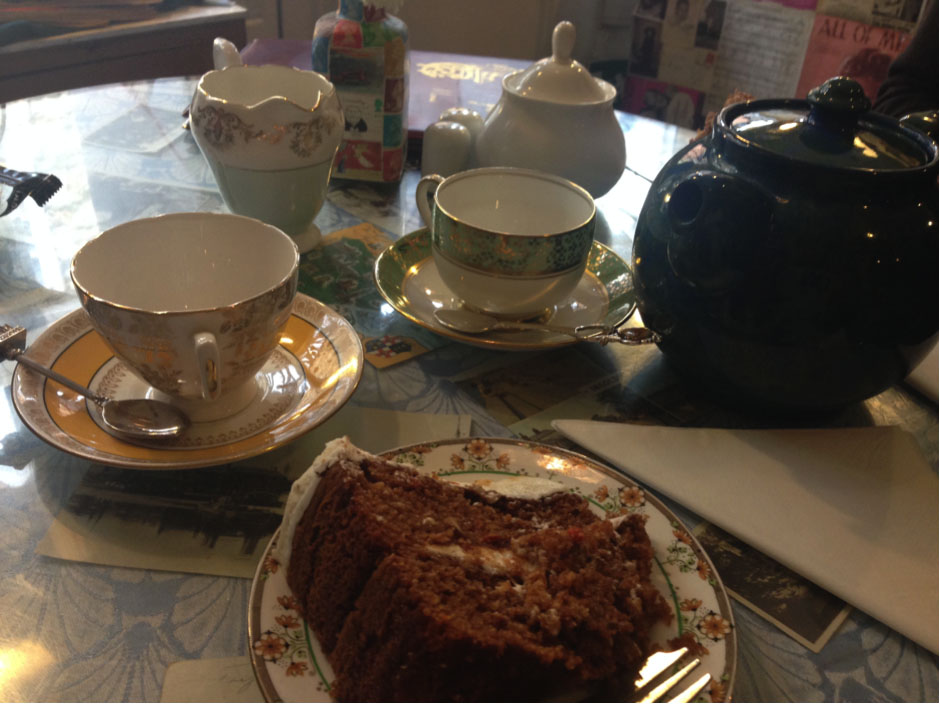 The highlight of Bunty’s Tea room for me was one that differentiated it from any other café I’ve ever been to…. The teaspoons…Now I’m no spoon collector, (which is lucky really) but if I was Bunty’s Tea Room would turn me in to a spoon thief.

Never before have spoons created such interest and conversation from the diners. On our table alone we had three teaspoons decorated with York Minster, Gretna Green Old Blacksmiths Shop and strangely enough a Salmon.

These become a talking point of our stay there as I attempted and failed to take a picture of Teaspoon York Minster in such a way that I could persuade people that I’d spent the day in York. 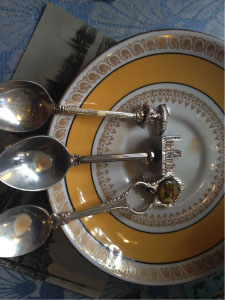 Not thoroughly mentioned nor forgotten are the runners up;

I’m a very hungry book worm with an unquenchable thirst for knowledge and adventure. In the past three years I ...read more