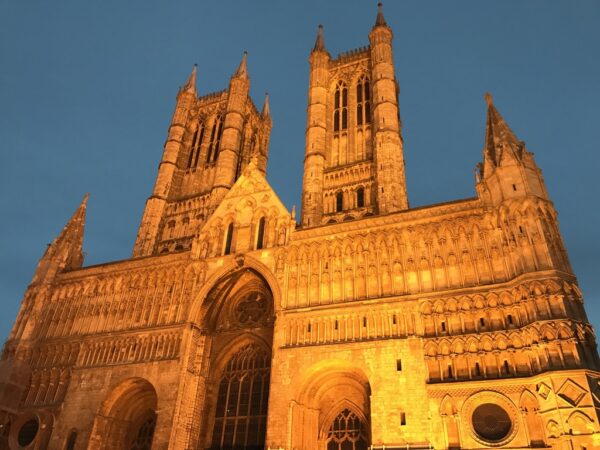 The origins of Lincoln Cathedral trace back almost a thousand years, to the era of William the Conqueror.

After the Battle of Hastings in 1066, William, Duke of Normandy became King William I of England (more commonly known as William the Conqueror). He spent the following years fighting rebellious natives across the land. Therefore, in order to consolidate his power, he built a series of castles, including the one at Lincoln.

One of William’s supporters was a Benedictine monk called Remegius. As a reward for his loyalty, William made Remegius the first Norman Bishop of Dorchester (the largest diocese in England, extending from the Humber to the Thames).

With the aim of unifying Norman power further in the north, it was decided to transfer the centre of ecclesiastical power from Dorchester to Lincoln. Remegius was ordered to build a cathedral, which he decided to do so on the site of an existing church. However, Remegius unfortunately died just hours before its consecration in 1092.

Over the next hundred years, Lincoln Cathedral experienced a series of unfortunate mishaps; a fire in 1124 which caused extensive damage, followed by an earthquake in 1185 which destroyed all but the West Front and the twin towers of the cathedral.

The fortunes of the cathedral are perceived to have been turned around by the appointment of Hugh of Avalon as Bishop of Lincoln in 1186. Bishop Hugh was a devout man, famed for his sense of justice and wisdom.

Despite his piety, he was a strong leader who was not afraid of standing up to the monarch of the day, be it King Henry ll, King Richard l (Richard the Lionheart), or King John. This made him very popular with his flock, if not with his king!

In 1192, he oversaw the building of a magnificent new Gothic-style cathedral, using such state-of-the-art architectural features as flying buttresses, ribbed vaults and pointed arches. This is the cathedral we see today.

As with Remegius over a hundred years earlier, Bishop Hugh did not live to see the new cathedral consecrated. He died in 1200 and was buried in his beloved unfinished cathedral. Pilgrims who came to worship at his tomb reported experiencing miracles of healing. So frequent were these reports of miracles that, in 1220, Hugh was canonised a saint.

On 6th October 1280, the body of Saint Hugh was reinterred in the newly built Angel Choir. Such was the importance of this ceremony, King Edward l and Queen Eleanor attended. The revenue from pilgrims attending the shrine of St Hugh made the cathedral extremely wealthy.

Lincoln Cathedral’s third famous bishop is Robert Grosseteste, who was one of the most prominent scholars of the 13th Century. A philosopher and theologian, he first became Chancellor of Oxford University and then Bishop of Lincoln in 1235. As a reformer and evangelical, he was not afraid of opposing the great and the good if he saw an abuse of power, whether they be the Dean and Chapter of the Cathedral, the King or the Pope. However, just like with St Hugh, this made him popular with his flock but less so with those in power. Incidentally, Lincoln’s Bishop Grosseteste University is named so in his honour.

In the 14th century, the central tower and the two western towers were raised in height; wooden spires were added, making Lincoln Cathedral the tallest building in the world for over 200 years!

The following centuries proved far less turbulent for the cathedral.

As with all ancient buildings, restoration work is an on-going feature.  In recent years, the Bishop’s Eye and the Dean’s Eye, magnificent circular stained-glass windows, have been restored to their full glory.

Hollywood has even paid a visit to Lincoln Cathedral in recent years, when parts of The Da Vinci Code (in which the cathedral acted as a ‘body double’ for Westminster Abbey) and The Young Victoria were filmed in The Chapter House. Not since Edward I held an English Parliament there had the Chapter House seen such excitement!

In the Autumn on 2020, the Dean’s Green was opened up for public access for the first time in over 40 years. The area was fully landscaped with lawns, flowerbeds, seating and a water fountain as part of a National Lottery-funder renovation. In addition, the summer of 2021 will see the opening of The Old Deanery as the Cathedral’s brand new state-of-the-art visitor centre. 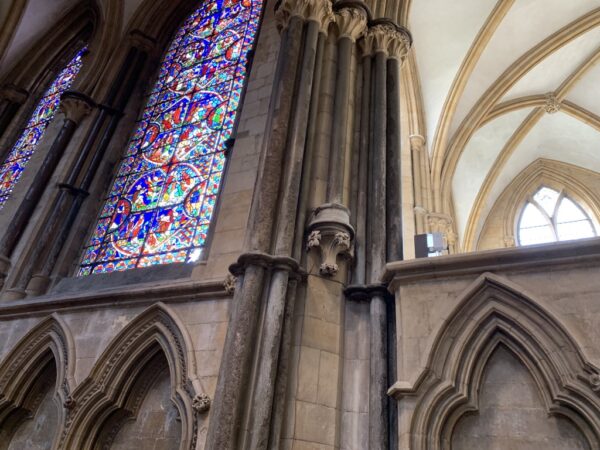 If you’re interested in learning more about Lincoln’s fabulous Cathedral or the various Cathedrals in England, give these a read: