Lincolnshire & The Invention Of The Tank

"The tank was invented in Lincolnshire" 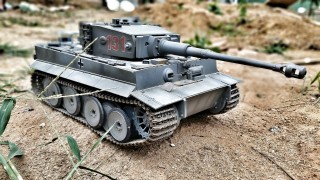 World War One is credited as being the first ‘modern’ war.

Notorious for its huge loss of life, it used machines such as tanks and aeroplanes for the first time.

The tank was developed and then manufactured in Lincolnshire.

Background to the invention of the tank

In 1905, Richard Hornsby & Sons of Grantham invented a vehicle capable of driving across rough and muddy terrain. It was an oil-driven tractor equipped with the world’s first caterpillar track.

Realising its potential, the company contacted the British Army, who were impressed by what they saw but didn’t purchase any.

Unfortunately for Richard Hornsby & Sons, their innovative caterpillar-wheeled tractor was not a commercial success, and they sold its patent to The Holt Manufacturing Company of California (now known as the Caterpillar Tractor Company) who started mass-production of the vehicle.

Ironically, the British Army bought some of these American-manufactured machines, now called Holt Tractors, to tow heavy artillery at the beginning of WW1.

By chance, in December 1914, a high-ranking British Army officer, Lieutenant-Colonel Ernest Swinton, saw a Holt Tractor in action and wondered if it could be modified to become an armoured attack vehicle which could negotiate the mud of the battlefields.

Winston Churchill’s role in the invention of the tank

In 1915, Winston Churchill, the First Lord of the Admiralty, set up a Landships Committee in order to tackle the difficulties of trench warfare.

A Lincoln company specialising in the manufacture of  farm machinery, William Foster & Co, was commissioned to turn a Holt Tractor into the ‘mechanically propelled landship’ envisaged by Lieutenant-Colonel Swinton several months earlier in northern France.

William Ashby Tritton was chairman of William Foster & Co at the time. He, and a naval lieutenant, Walter G Wilson, set about converting the tractor.

A room was set aside for them to use as a drawing office at the White Hart Hotel in Lincoln. Early trials of the machine resulted in failure, so the pair returned to the original drawings used by Richard Hornsby & Sons of Grantham for their oil-driven tractor with caterpillar wheels.

By the end of 1915 , ‘Little Willie’, became the world’s first prototype tank. Although Little Willie was never used in combat, it was the blueprint for all subsequent British Army tanks.

By 1916, William Foster & Co went into full production of the tank.

Legend has it that, such was the need for secrecy, the staff at William Foster & Co were told that they were actually manufacturing a mobile water carrier (ie water tank) for use in Mesopotamia. The vehicle started to be known as the ‘tank’, and the rest, they say, is history!

Today, at the White Hart Hotel, there are several plaques outside the room used by William Tritton and Lieutenant Wilson, commemorating their momentous achievement.