The City of Lincoln has a remarkable, rich history, evident even to this day. While ancient roads and structures have slowly been built upon over the centuries, there are still many areas and buildings in the city that bear prominent and unmistakable signs of its past.

Lincoln was a part of Britain conquered by the Romans in AD48. Not long after this, the Romans built a legionary fortress high on a hill overlooking what is now known as Brayford Pool, for which it is presumed to have been named Lindon, meaning “The Pool”, by its earlier Celtic inhabitants. 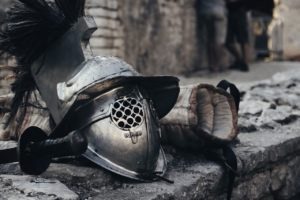 This name was later Latinized to Lindum. When the legion moved on to York towards end of the first century, it became a settlement for retired soldiers and became known as a colonia. The city’s present name, Lincoln, is a corruption of Lindum Colonia.

The city underwent an extensive and extraordinary public works plan that included a forum, basilica, baths, temples and even an aqueduct and a series of pipes that brought water into Lincoln. The military fortifications were strengthened with stone walls and extended south and downhill, almost to the northern banks of River Witham.

This river was an essential route that linked Lincoln to The Wash and River Till, and was a busy place used for trading.

The river was deepened to make Lincoln accessible to ships, and the Fossdyke was dug to link the River Witham to River Trent. During this time people also settled beyond the city’s fortified walls. A large suburb stretched to a kilometer south of the river down the Fosse Way and Ermine Street, a major Roman road that connected Lincoln to London and York.

The settlement in Lincoln flourished over the course of the 2nd and 3rd centuries and is believed to have had a population numbering in the thousands. People gathered together in the forum, or market place, which was lined with shops. The Roman baths were also popular as a place to socialise.

However, Lincoln and its waterways fell into decline in the early 4th century, and the city was largely deserted by the end of the 5th century.

Traces of its Glorious Past

To this day, evidence of Lincoln’s Roman colonisation still exists, although most of it has fallen into ruins. One of these Roman structures that still stand today is Newport Arch which is the north gate of the town. It is the only surviving Roman arch in Britain. 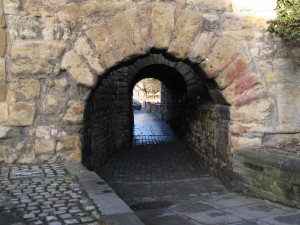 Newport Arch, located in Bailgate, was built in the 3rd century, but because of the raised height of the modern road, it stands 2 metres lower than it did when it was originally constructed. During the Medieval period, a smaller pedestrian entrance was added alongside it.

Another visible reminder of the city’s Roman past is the impressive remains of the East Gate’s northern tower, on the grounds of what is now Eastgate Hotel. This dates from around the same time as Newport Arch.

A massive section of the ‘mint wall’ measuring 70ft (21m) long and 18ft (5.5m) high can also be found on the upper side of town, just off the Westgate in West Bight. This is widely believed to have been the Roman Basilica’s rear wall. On the opposite side of the Westgate are the evidences of a well and part of a semi-circular chamber.

In the grounds of the Bishop’s Palace are more remarkable surviving sections of the Roman wall. In the lower part of town within the premises of the City Council’s offices, the ruins of the West Gate can still be seen.