I hopped athletically over a stream with my ears ringing from my girlfriend’s shout of “if you fall in I’m not going in after you”, something that’s always reassuring to hear from a loved one. But I nailed the landing, knees bent, feet on the leafy ground. Why have I just jumped over a stream? To capture pictures of the vast diversity within this patch of woods of course; horse chestnut trees, sweet chestnut, cedar of Lebanon (I have no idea which ones are where, but a helpful board told me all these and more lived at Swanholme).

Swanholme really is a tapas of nature, a tree from here, a tree from there, and to top it off, a couple of lakes for dessert. It’s an overwhelming place to wander, and you leave feeling almost a sense of guilt for overindulging in Mother Nature’s backyard. It’s a place full of all sorts of critters, such as; Swans (of course as the name suggests), all sorts of English bugs and even a couple of Snakes. The friendliest of them all though (well to us, he might not like you as much) was a squirrel that sat with us as we ate our lunch, and turned down the crouton I offered him with an animal politeness (smelt it and ran, although he later chased off a crow that fancied it).

So to carry on from my leap. I walked parallel to my girlfriend on the other side of the stream only to find a bridge across it a couple of metres on around a corner. Making my stream hopping look stupid and impatient rather than brave and heroic. I felt like an impatient car driver that’s overtaken a car, only to be stopped by a traffic light, allowing the other car driver to pull up alongside with a smug smile of “You got far didn’t you? 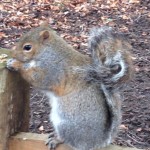 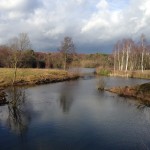 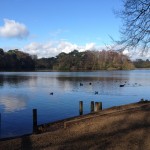 We sat on one of the many benches to eat our Morrison’s salad bar tubs. Unfortunately for us out of the many, we chose the wrong one. Sitting in the shade we clenched our fists repeatedly to maintain enough heat in our hands to grasp our forks.

Moving on after the meal, or better yet, we were moved on after the meal (as our swift exit came under the pressure of a phalanx of water birds), we then found an absolutely perfect sunlit bench. With an even better view of the lake, so we sat there for a few minutes to discuss what fools we had been to sit on the first bench with this sun heated haven around the corner.

A walk around Swanholme really is a return to the primitive, a reminder of our supposed ancestry (I don’t want to offend anyone) and of the world that exists outside of our concrete buildings and big yellow M’s.

You might think, where’s there to eat in this neck of the woods (literally). Well lucky for you I know a place… and it’s not just any place, it’s a pub from my favourite pub chain ‘Vintage Inns’. Vintage Inns are the pinnacle of countryside pubs; cheap, homely, and appropriately placed (don’t worry I haven’t forgot the food, I’m coming to that).

In the South Western corner of Swanholme lakes lies ‘The Swanholme’. A countryside pub that feels like just that; tonnes of real wood, fluffy pillows, big thick wood tables. The floors heavily patterned carpet, dusky lamps hang beneath thick wooden ceiling beams. It’s the perfect rustic fit to complement its natural neighbour. The Swanholme, a quintessential pub, a pub model that is almost extinct, a pub where the atmosphere alone draws you in (and not the need for a bevvy).

I promised you earlier the food, and I like to think of myself as an honest Abe so here’s a brief run in on it all;

From Monday to Saturday they do a fantastic lunch time offer till 5pm consisting of three courses for £10.50.

I usually go for; 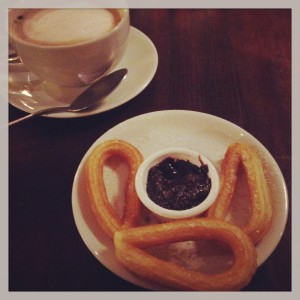 And after 5pm the menu gets even more interesting with items such as;

And plenty more, which I won’t be getting in to because it really wouldn’t be fair to drag my thoughts in to those realms of food whilst my fridge bares only some dried out Spinach and half a broccoli tree.

All the menu can be viewed online from here;

To summarise; both Swanholme Lakes and The Swanholme provide outstanding environments, but to combine the two together is to experience the best of England’s nature and hospitality.

Imagine entering The Swanholme after a walk around Swanholme lakes;

Into the warmth and cosiness of The Swanholme,

A woody pub inspired by the pubs of old,

With pillows a plenty and a dusky dim lighting perfect for the weary traveller (and of course that well-earned whiskey/your drink of choice).

Does life get any better? (and if it does I’m not quite ready for it yet)

I’m a very hungry book worm with an unquenchable thirst for knowledge and adventure. In the past three years I ...read more