"William the Conqueror ordered the building of Lincoln Castle in 1068. After his victory at the Battle of Hastings in 1066, William struggled with Anglo Saxon uprisings across the country" 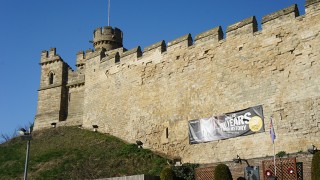 Similar to the city itself, Lincoln Castle has a long and fascinating history. It began with William the Conqueror ordering the building of the Castle in 1068. After his victory at the Battle of Hastings two years prior, he struggled with Anglo Saxon uprisings across the country. For almost five years, William and his army were forced to live like an invading army, stamping down rebellions as they marched north and west. Therefore, in order to strengthen his hold on power, he had a series of castles built across England.

Having passed through Lincoln in 1067 on his way north, William had recognised the strategic importance of this old Roman fortress. Firstly, it was situated at the top of a hill, overlooking both the city and the valley of the River Witham (from which he could access the rivers Trent and Humber and thereby the North Sea). Additionally and crucially, it had Ermine Street (the old Roman road between London and York) running through it, with Fosse Way (the old Roman road linking Lincoln to the south-west) also close by.

William ordered the building of a castle on the site of the old Roman fort – thus Lincoln Castle became the very first Norman castle to be built in England.

The Battles of Lincoln

Lincoln Castle was at the centre of two significant battles which changed the course of English history:

The first Battle of Lincoln took place on 2nd February 1141 between King Stephen and Empress Matilda, who was the daughter of King Henry I. After his death in 1135, it was expected that she would succeed him; he had no living male heir and her claim to the throne was supported by the Norman Barons.

However, Henry’s nephew, Stephen, made a counter-claim to the throne by saying that Henry, on his deathbed, had proclaimed Stephen his legitimate heir. Many of the English Barons did not like the idea of being ruled by a woman and were therefore happy to support Stephen’s claim.

Later that year, Stephen was crowned king at Canterbury whilst Matilda was still in France. This led to a civil war between Stephen and Matilda which lasted almost 20 years.

In 1140, Matilda and her knights seized control of Lincoln Castle. The city of Lincoln was, by this time, one of the richest cities in England. King Stephen’s army counter-attacked, retaking Lincoln and causing Matilda to flee.

However, shortly after this, Matilda’s supporters tricked their way into the castle and once again retook it in her name. Stephen was furious at losing Lincoln yet again and marched at the head of his army to besiege the city. A battle between the two opposing sides took place on 2nd February 1141, during which King Stephen was captured.

He was taken to Bristol (Matilda’s stronghold in England), where he was imprisoned. A triumphant Matilda proceeded to London for her coronation. However, in return for the English crown, she had to sign a peace treaty which would have disadvantaged her supporters – which she refused to do.

Taking advantage of this impasse, the imprisoned Stephen’s wife (also called Matilda, confusingly) rallied an army in support of her husband, ready to attack London. However, the people of London themselves rebelled against Matilda, driving her and her supporters out of the city.

Empress Matilda’s most powerful ally, Robert, Earl of Gloucester, was captured, which forced her to release Stephen in return for him.

The following year saw Matilda defeated at the Battle of Winchester and, with that, her ascendancy over Stephen ended. However, Lincoln Castle did not fall back into the King’s hands until 1144.

The second Battle of Lincoln took place on 20th May 1217, eight months after the death of King John.

King John had famously upset both his barons and the church with his tyrannical misrule and abuses of royal power. This led to an uprising of many English barons and resulted in a devastating civil war known as the First Baron’s War.

In order to bring civil war to an end (and also hold on to the throne), King John met with the rebellious barons at Runnymede. He agreed to a set of terms which would severely limit his power in return for their loyalty. This agreement, or charter, is what is known as Magna Carta. Unsurprisingly, John had no intention of honouring a charter which would have drastically reduced his royal powers. War soon broke out again between he and the barons.

The rebel barons turned to King Philip II of France for support. In return for this, they agreed to support the claim of his heir, Louis, to the English throne.

After the death of King John at Newark Castle on 19th October 1216, he was succeeded by his 9-year-old son; King Henry III.

The French forces realised the strategic importance of Lincoln, having both Ermine Street and Fosse Way running through it. They had taken control of the city the previous year but had not managed to capture the castle, which remained loyal to the King.

By this time, many of the rebel English barons now supported the boy King Henry III. They’d originally supported Louis’ claim to the English throne, but changed sides upon the death of the hated King John.

William Marshall, Earl of Pembroke, who was in charge of the King’s army, had called for all nobles in possession of an English castle to rally at Newark Castle and, from there, march with their men to retake Lincoln.

On hearing this, Louis’ army attacked Lincoln Castle on 20th May 1217. Fierce fighting lasted for six hours, spilling out from the castle into the city below. It resulted in a crushing defeat for Louis’ army.

This second Battle of Lincoln marked the end of Louis’ claim to the English throne. With much of his army either captured or killed, he was forced to sign a peace treaty in return for his free passage back to France.