"During World War II, Lincolnshire became known as “Bomber County” due to the fact that it was home to a large number of airfields – 49, to be exact" 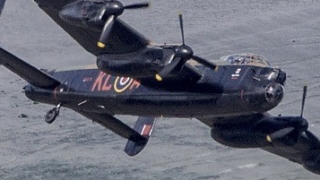 The History of Lincolnshire Aviation

Much is known about the role played by Lincolnshire’s aviation during World War II, including the famous Dambuster’s Raid made by Guy Gibson and his 617 Squadron from RAF Scampton.

What is less well known is that, by the end of World War II, Lincoln had become a world leader in aircraft production.

During World War II, Lincolnshire became known as “Bomber County” due to the fact that it was home to a large number of airfields – 49, to be exact, which was more than any other county in England.

The average distance between these airfields was 7.5 miles, with bomber stations typically taking up approximately 700 acres. The county was at the forefront of the allied air offensive and was home to 1 Group and 5 Group of the Bomber Command of the Royal Air Force.

The Lincolnshire-based bombers contributed heavily to many crucial attacks in the war against Germany, including;

Aside from these undertakings of the Bomber Command, Lincolnshire was witness to the action of day and night fighters, anti-shipping strike and transport, as well as flying trainings.

The Battle of Britain Memorial Flight, the RAF’s tribute to the aviators of World War II, is also held in the county and operates a Lancaster, five Spitfires, two Hurricanes, two Chipmunks and a Dakota. The Lincolnshire County Council and Royal Air Force partnership facilitates the viewing of these historic aircraft at their base at RAF Coningsby.

In addition to this, there are various aviation museums and heritage centres throughout the county of Lincolnshire which showcase restored airfield buildings, control towers and operations rooms, among others.

For more information on this, please visit our Lincolnshire modern aviation page.

Below is a list of Lincolnshire aviation museums, visitor centres and heritage centres.

2018 marked the 100th anniversary of the RAF and a whole host of celebrations took place across Lincolnshire to mark the momentous occasion. For more information, visit our information page.