"Home to 617 (Dambusters) Squadron, the Vulcan bomber, and The Red Arrows - to name but a few - RAF Scampton has a fascinating history to tell" 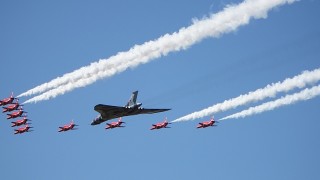 The RAF Scampton Heritage Centre is a fantastic air museum located at RAF Scampton, 5 miles north of Lincoln on the A15.

Home to 617 (Dambusters) Squadron, the Vulcan bomber, and The Red Arrows – to name but a few – RAF Scampton has a fascinating history to tell.

A Brief History of RAF Scampton

Why Scampton was chosen as an airbase: 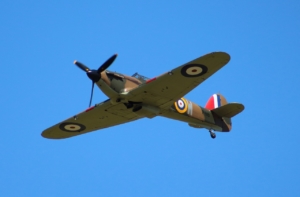 Spring 1917: Brattelby Cliff changes its name to the Royal Flying Corps Station, Scampton. It is home to Operational Training Squadrons 11, 60 and 81 (flying the Sopwith Camel, Pup and Dolphin aeroplane).

Winter 1918: RFCS Scampton is abandoned at the end the end of WW1, falling into a state of neglect and disrepair.

1930s: The Air Ministry comandeers many abandoned WW1 airfields, including Scampton, and starts redeveloping them.

August 1936: RAF Scampton re-opens. 9 and 214 Squadrons relocate there from Northern Ireland. Within 6 months, they are replaced by 49 and 83 Squadrons.

September 1939: RAF Scampton is transferred to Bomber Command at the outbreak of war.

49 and 83 Squadrons are involved in dangerous low flying missions – either mine-laying or bombing well-protected German shipping.

August/September 1940: airmen from both Squadrons are awarded the Victoria Cross:

In August 1940,  Flight Lieutenant RAB Learoyd of 49 Squadron, was awarded a Victoria Cross following a raid to destroy an aquaduct on the Dortmund- Elm Canal. 11 Hampden bombers left Scampton on  the evening of 12th August. During the raid, 2 aircraft were lost and 2 were badly damaged. Undeterred by this, and by the fact that his plane was next in line to run the gauntlet of deadly flak barrages – Flt Lt Learoyd took his aircraft down to 150 feet and made his bombing run in the full glare of  blinding searchlights. His aircraft was repeatedly hit, losing several larges pieces of the fuselage, and sustaining severe damage to its hydraulic system (rendering the wing flaps and undercarriage useless). Nevertheless, despite incurring such serious damage, he and and his crew managed to drop their bombs on the canal before limping home. Once safely over the Lincolnshire countryside, Flt Lt Learoyd decided that it was unsafe to land his badly damaged aircraft in the dark – so he waited until daybreak before making a safe landing! 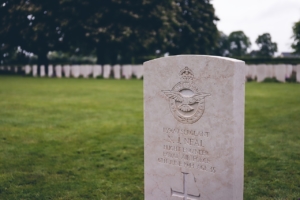 In September 1940, Wireless Operator/ Air Gunner Flight Sergeant John Hannah of 83 Squadron, was awarded a Victoria Cross for bravery when his aircraft was set alight during a night-time attack on invasion barges at Antwerp. Two crew members bailed out of the burning aeroplane, but Sergeant Hannah remained on board to fight the fire, initially using fire extinguishers but when they ran out, using his log book – during which time, thousands of rounds of ammunition were exploding around him and almost blinded him. Despite sustaining terrible injuries, he managed to extinguish the fire, enabling the pilot to fly the severely damaged plane back to England. Left with greatly weakened lungs, Sergeant Hannah contracted TB the following  year from which he never fully recovered, and died in 1947 at the age of 25. He was the youngest recipient of the Victoria Cross for aerial operations during WW2.

March 1943: 617 Squadron is created in order to carry out Operation Chastise, more commonly known as The Dambusters’ Raid.

Operation Chastise was an ambitious project to attack the Rhur Dams using Barnes Wallis revolutionary ‘bouncing bomb’. It was the very first time that precision bombing was used by the RAF.

Bomber Command thought that the destruction of  the 5 Rhur Valley Dams – the Mohne, Sorpe, Eder, Ennepe and Lister – would severely disrupt the German war effort. It was hoped that destroying these dams would: cut off the vital water supply to Germany’s industrial heartland (the Rhur Valley); destroy crucially important  hydro-electric power stations located next to the dams; flood factories and other industrial plants; and damage the railway/inland waterway system infrastructure. The Mohne and Sorpe Dams were to be the main targets, with the Eder, Ennepe and Lister Dams to be secondary targets.

16th – 17th May 1943: Led by 24 year old Wing Commander Guy Gibson, 19 Lancaster bombers took off from RAF Scampton on the evening of 16th May 1943. Flying low (at 100ft and under) in order to evade enemy radar, 617 Squadron incurred heavy loses before even reaching its target: 5 planes were lost on the outbound journey and 2 were so badly damaged that they had to abort their mission and return home. Another plane was shot down over the Mohne Dam before it dropped its bombs.

However, 11 Lancaster bombers did manage to attack their target, resulting in both the Mohne and Eder Dams being breached, and the Sorpe Dam sustaining damage. Of these 11 remaining aircraft, only 9 made it home – a further 2 were lost on their homeward journey.

Wing Commander Guy Gibson was awarded a Victoria Cross for the heroism he showed during the raid – he repeatedly used his aircraft to draw anti-aircraft fire away from the other planes in his formation. A total of 34 gallantry medals were awarded to aircrew who flew on Operation Chastise.

Guy Gibson was shot down and killed the following year, aged just 26. He is buried in Steenbergen, Holland.

25th April 1945: the last bombing mission from RAF Scampton is launched – the target is Hitler’s mountain retreat in Bavaria, the Berghof. By now, Hitler is hiding in his Berlin bunker and commits suicide on 4th May 1945. Germany surrenders 3 days later.

1948/9: Scampton becomes home to aircraft of the US Strategic Air Command – namely the B-29 Superfortress.

1958: 617 Squadron is re-formed at RAF Scampton, with the Vulcan bomber replacing the Lancaster.

1963 – 1969: 617 Squadron is equipped with nuclear missiles: the Standoff Air to Surface Nuclear Missile (more commonly know as the Blue Steel).

You have to pre-book a visit to the RAF Scampton Heritage Centre, either online or by telephone, and bring along with you photographic ID if you are over 16. You will not be allowed entry onto the base without having booked in advance and without photo ID.

Allow enough time to pass through security checks and to be issued with your pass.