"Celebrate Lincolnshire Day on October 1st 2015 and take part in some of the fantastic events being held across the county." 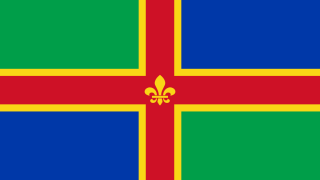 Lincolnshire Day began in 2006 with a petition to formally recognise the Lincolnshire Rising, an rebellion that began in Yorkshire in October 1536 as a protest against Henry VIII’s dissolution of the monasteries and England’s separation from the Roman Catholic Church.

Nine thousand Lincolnshire protesters marched to York, where Henry and his court were staying, and demanded the reintroduction of Catholic worship practices. Henry agreed to the demands of the Lincolnshire protesters, but soon went back on his word. The leaders of the uprising were executed and Henry’s Church of England reclaimed control of the city.

Today, residents of Lincolnshire commemorate that event by hosting Lincolnshire Day which celebrates the culture, traditions and history of the county.

During Lincolnshire Day, you’re bound to see a few Lincolnshire flags flying in windows and on cars, while Lincoln Cathedral will be opening its doors for free tours throughout the day.

There will be events held across the county, from food and drink festivals and music concerts, to history talks and discounted rates for local attractions.

Many choose to show their participation in the festivities by dressing up in yellow; a homage to the term ‘Yellow-Belly’ which refers to anyone from Lincolnshire. Although there is no concrete explanation for this nickname, many origin stories have emerged over the years:

Of course, these are just a few explanations behind the name. Do you have a better one? If so, tweet it to us @Lincolnshireorg using the hashtag #LincolnshireDay

Lincolnshire has some of the most beautiful and tranquil landscapes in the country: from the rolling hills of the Lincolnshire Wolds and the epic expanses of the Fens, to the historic city of Lincoln and the bustling seaside towns. The county itself is largely given over to farmland and agriculture, which means there are plenty of fantastic walks and rambles to choose from.

Lincoln Cathedral will be offering free entry on Lincolnshire Day from 7:15am to 6pm. This iconic landmark was once the biggest cathedral in Europe and dates back to the 11th century.

In the evening in Lincoln, Professor Mona Sidiqui will be giving a lecture, hosted by Lincoln Theological Society, held at Bishop Grosseteste University from 7:30pm. Tickets cost £5 per person, and include a drink of juice or wine.

The Lincoln Food and Lincoln Craft Market will be in operation in Lincoln City Centre on October 1st, held in St Mark’s Shopping Centre and the Lincoln City Square respectively.

For true Yellow Bellies, there are a few culinary traditions you must adhere to if you want to commemorate Lincolnshire Day in style and they include a meal of Lincolnshire sausages, followed by Lincolnshire Plum Loaf with Lincolnshire Poacher Cheese, washed down with a pint of Bateman’s ale. Perfect!

The people of Lincolnshire are friendly, welcoming and always happy to chat about pretty much anything, but ask a local butcher his recipe for Lincolnshire sausages and you may find yourself turfed out the door before you can say ‘Yellow Belly.’

Lincolnshire Sausages are a prized symbol of the region and have been made here for as long as anyone can remember. The basic recipe is fairly standard; coarsely chopped or mined pork, herbs and bindings, but that’s about where the similarities end. Every butcher and sausage-maker adds their own unique twist to make their sausages the best.

The Lincolnshire Sausage competition takes place every year and sausage aficionados come from all over the region, and beyond, to try and wow the judges with their particular blend of ingredients.

Lincolnshire Poacher Cheese is made in only one place in the whole country and the locals are happy to keep it that way. Made at Ulceby Farm, in Alford, by master cheese-maker Richard Tagg, this hard cheese is made from unpasteurised cow’s milk and is shipped all over the world to cheese-lovers everywhere. They even make an amazing selection of cheese wedding cakes!

Since 1917, this family-run business has poured experience and expert care into its products and their cheeses, including goat and sheep selections alongside the original Poacher Cheese. Traditionalists like to have their cheese cut thickly and stacked onto warm Plum Bread (see below) while others like to take it up a notch with local Rarebit recipes, cheese soufflés or Hunter Pie.

Founded in 1874, Batemans Brewery originally only produced one local ale, but now this has grown to eight and Bateman’s are now well-established, not just across the county, but internationally as well.

The award-winning team creates both cask and bottled beers, from light and refreshing ales to rich and full-bodied bitters. Those of you who are eager to sample the many delights on offer can visit the brewery itself, or track down a local festival or event where the brewery is showcasing its wares – they travel across the country all year round so that everyone can get a taste.

The most common recipes for Lincolnshire Plum Bread include a variety of dried fruits, such as sultanas and raisins, soaked in tea and then baked into a slightly sweet dough. It is traditionally served with Lincolnshire Poacher Cheese but any kind of cheese, or even just butter, will do.

Plum loaves are often given as gifts, especially around Christmas time, as an alternative to Christmas puddings or Stollen cake.

You may never have heard of it before if you’re not from Lincolnshire, but Stuffed Chine is as popular here as ham and bacon. Stuffed Chine is made from salted pork neck, stuffed with parsley and cut into slices. It is typically served cold, served with chutney and, when sliced, creates an attractive green-and-white pattern between the pork meat and herb filling.

Grimsby is well-known across the UK for supplying fresh fish and seafood, and in the 1950s it was the largest and busiest fishing port in the world. Today, Grimsby still exports a large percentage of its catch elsewhere but a good portion is snapped up by the locals on a daily basis.

Traditional Grimsby smoked fish has achieved recognition as a staple of Lincolnshire cuisine and in 2009 was awarded Protected Geographical Indication (PGI) status by the European Commission.