"Lincolnshire is home to England's very first Norman castle, was birthplace to King Henry IV, and has played a crucial role in two World Wars" 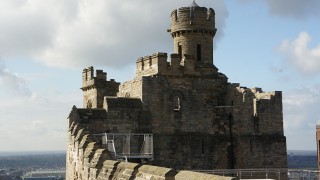 Lincolnshire History & Heritage is long and fascinating. This largely agricultural county has played an important role throughout British history.

Amongst other things, Lincolnshire is home to the very first Norman castle built in England, was birthplace to King Henry IV, and has played a crucial role in two World Wars.

Lincolnshire was of strategic importance to the Romans as they marched northward in their quest to conquer Britain. Roman forts were constructed across Lincolnshire including at Ancaster, Caistor and Louth. Lincoln, or Lindum Colonia, became one of the largest and most influential Roman towns in England, and still has many impressive Roman remains scattered across the city.

The Romans built their two most important roads through the county. Ermine Street, linking London with York, and Fosse Way, from Lincoln to Exeter, are still used – travel along a very straight road in Lincolnshire, and chances are it will either be Ermine Street or Fosse Way! The Fosse Dyke canal was constructed to link Lincoln with the River Trent – and from then on to the Rivers Ouse and Humber, and eventually the North Sea.

After the Battle of Hastings in 1066, the Normans (like the Romans before them) had to fight their way across the length and breadth of England in order to gain control. For nearly five years, William the Conqueror and his army had to live like an invading force, putting down Anglo-Saxon rebellions as they marched north and west. In order to strengthen his hold on power, he had a series of castles built across England.

Having passed through Lincoln in 1067 on his way north, William had recognised the strategic importance of the old Roman fort here. Not only was at the top of a hill overlooking both the town and the Trent Valley, it also had excellent transport links in the shape of Fosse Dyke, Ermine Street and the Fosse Way. William ordered that a new Norman castle was to be constructed on the site of the old Roman fort – and thus in 1068 Lincoln Castle became the very first Norman castle to be built in England.

In order to further consolidate Norman power in the north, one of William’s most faithful supporters, Archbishop Remegius was ordered to transfer ecclesiastical power to the city and build a new cathedral.

In 1092, Lincoln Cathedral was finally consecrated, just days after the death of Archbishop Remegius.

Henry Bolingbroke, son of  John of Gaunt and Blanche of Lancaster, was born at Bolingbroke Castle in 1366. A  year after his birth, Henry’s mother Blanche died of the plague and his father, John of Gaunt, inherited all of her Lancastrian titles and wealth. In 1399, Henry usurped King Richard II to become the first English Lancastrian king.

Catherine Parr, 6th and final wife of King Henry VIII, lived in Gainsborough and then Kirton-in-Lindsey after her first marriage to Sir Edward Burgh. In 1543 she married King Henry VIII at Hampton Court Palace.

Lincolnshire and The English Civil War

Lincolnshire played a pivotal role during the English Civil War. Loyal to the crown, Lincolnshire suffered several bloody battles in 1643 that led to defeat for the Royalists in the county and marked the beginning of the end for King Charles I and his Royalist supporters.

Between the months of May and July 1643, the Parliamentary Forces led by Oliver Cromwell and Lord Willoughby, defeated the Royalists during the Battles of Grantham and Gainsborough.

It was at The Battle of Winceby in October 1643, that Cromwell defeated the Earl of Newcastle (for the Royalists) and thus ended the Royalists’ southward march on the capital.

Lincolnshire and The Pilgrim Fathers

Although it is widely known that in 1620, the Pilgrim Fathers set sail on the Mayflower from Plymouth to America in search of a better life, what is less well known is that a significant number of them were from Lincolnshire.

Ten years later, another group of settlers from Boston in Lincolnshire went to live in Massachusetts, and named their new settlement after their home town. Boston, Massachusetts, is of course now one of the USA’s most important cities.

For more information about Lincolnshire and The Pilgrim Fathers, please click here.

The Georgian era is renown for its style and elegance. Lincolnshire has many delightful Georgian towns, including Stamford, which is an excellent example of the grace and elegance of Regency architecture and one of England’s finest Georgian towns.

Georgians were also fascinated by learning and exploration. One of the most eminent scientists of the time was Lincolnshire-born Sir Joseph Banks. Sir Joseph Banks was a botanist who accompanied Captain Cook on his voyage to circumnavigate the globe. He later became President of the Royal Society and helped King George III to turn the Royal Botanic Gardens into the finest botanical gardens in the world.

Nearly a century later, Richard Hornsby & Sons of Grantham and William Foster & Co of Lincoln would come together to invent a vehicle that would change the nature of warfare forever (see below).

Lincolnshire and the invention of the tank.

The huge loss of life In World War One is well documented. By 1916, both sides had become locked into a war of attrition, often quite literally bogged down by the mud and mire of the trenches. What was needed was something to break the stalemate.

In 1915, Winston Churchill, the First Lord of the Admiralty, set up the Landships Committee in order to tackle the difficulties of trench warfare. William Foster & Co of Lincoln, were commissioned by the Landships Committee to convert a tractor with caterpillar wheels (first invented by Richard Hornsby & Sons of Grantham) into a ‘mechanically propelled landship’.

William Ashby Tritton, chairman of William Foster & Co, and naval Lieutenant Walter G Wilson, set about the task. A room was set aside for them to use as a drawing office at The White Hart Hotel in Lincoln. Early trials of the machine resulted in failure, so the pair returned to the original drawings used by Richard Hornsby & Sons of Grantham for their oil-driven tractor with caterpillar wheels. By the end of 1915 , the world’s first prototype tank, known as ‘Little Willie’ had been built.

For more information about Lincolnshire and the invention of the tank, please click here.

Lincolnshire was known as ‘Bomber County’ during the Second World War. It’s flat terrain and easterly location made Lincolnshire the perfect place to build RAF airbases – the county had more airbases than anywhere else in Britain.

617 Squadron, more famously known as The Dambusters, led by Wing commander Guy Gibson, were based at RAF Scampton.

The Lincolnshire Aviation Heritage Trail follows the story of the RAF during the Second World War in Lincolnshire.