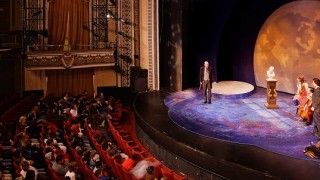 Lincoln New Theatre Royal, recently renovated to its full Victorian splendour, it is a cosy and intimate venue from which to see great plays, musicals and, of course, the ever-popular panto!

Built in 1893 to replace a previous theatre which had been destroyed by fire, Lincoln Theatre Royal showed popular plays and music hall acts. In 1907, the frontage of the theatre was extended – resulting in the Grade ll Listed Building we see today.

During the Second World War, it was very popular with RAF personnel from nearby airbases, including Guy Gibson, leader of the famous Dambusters Squadron, based at RAF Scampton.

Now run by ID Entertainment Group, which has completely renovated it – including a fantastic new theatre bar – Lincoln New Theatre Royal has a full calendar of plays and shows.

The New Theatre Club welcomes theatre lovers to join them. For a small annual fee, members can enjoy such benefits as discounted tickets and invitations to special events including pre-season launches, 1st night post-show receptions and sneak previews of the rep company in rehearsals.

Lincoln New Theatre Royal seats 482 persons. It accepts bookings for private functions and events such as school shows, business conferences, music festivals and performances, rehearsals and more. Interested parties can get in touch with Lincoln Theatre Royal by email at: enquiries@lincolntheatre.com.