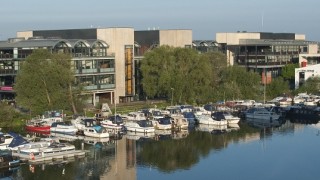 The University of Lincoln’s main campus is situated in the heart of the city, overlooking the Brayford Pool Marina. More than £140 million has been invested on the Brayford Campus, which was the first new city centre university campus to be built for over twenty five years.

Lincoln University’s Brayford Campus was officially opened by Her Majesty the Queen in 1996.

Now home to almost 11,000 students and 1,200 staff, the University of Lincoln has enjoyed a rapid rise up the university league tables. In The Guardian’s University Guide 2013, it is ranked in the top 50 UK universities and in the top 25% in the latest Times Higher Education Student Experience Survey.

The University of Lincoln is a research-based university with excellent teaching and good career prospects for its graduates.

It has other campuses at Riseholme Park, Holbeach and Hull.

With a number of courses at the university ranking in the top ten in the UK for student satisfaction, the University of Lincoln prides itself on putting its students first.

It offers ‘inpirational’ teaching in a modern setting with state-of-the-art-technology, in the heart of a beautiful and historic city.

The Student Village is an on-campus student accommodation area, comprising of 17 blocks of self-catering apartments which house between 5 and 8 students per apartment. This waterfront complex is located on the Brayford Campus near the academic buildings.

Courses offered at the University

The university has an award-winning library located in the Great Central Warehouse on the Brayford campus. Originally an old railway warehouse, £5 million has been spent on turning into a state-of -the -art learning resource centre. Smaller libraries are located at the other campuses.

The Lincoln Performing Arts Centre (LPAC) is a purpose-built, ultra-modern performance venue located close to the library. Its multipurpose auditorium can accommodate up to 450 people and is designed for live arts performances and film screenings.

The Engine Shed is Lincoln’s largest live music venue and is open to both students and the general public. It has attracted acts such as Stereophonics, Kings of Leon and Dizzee Rascal.

Use the form to get in touch with Lincoln University